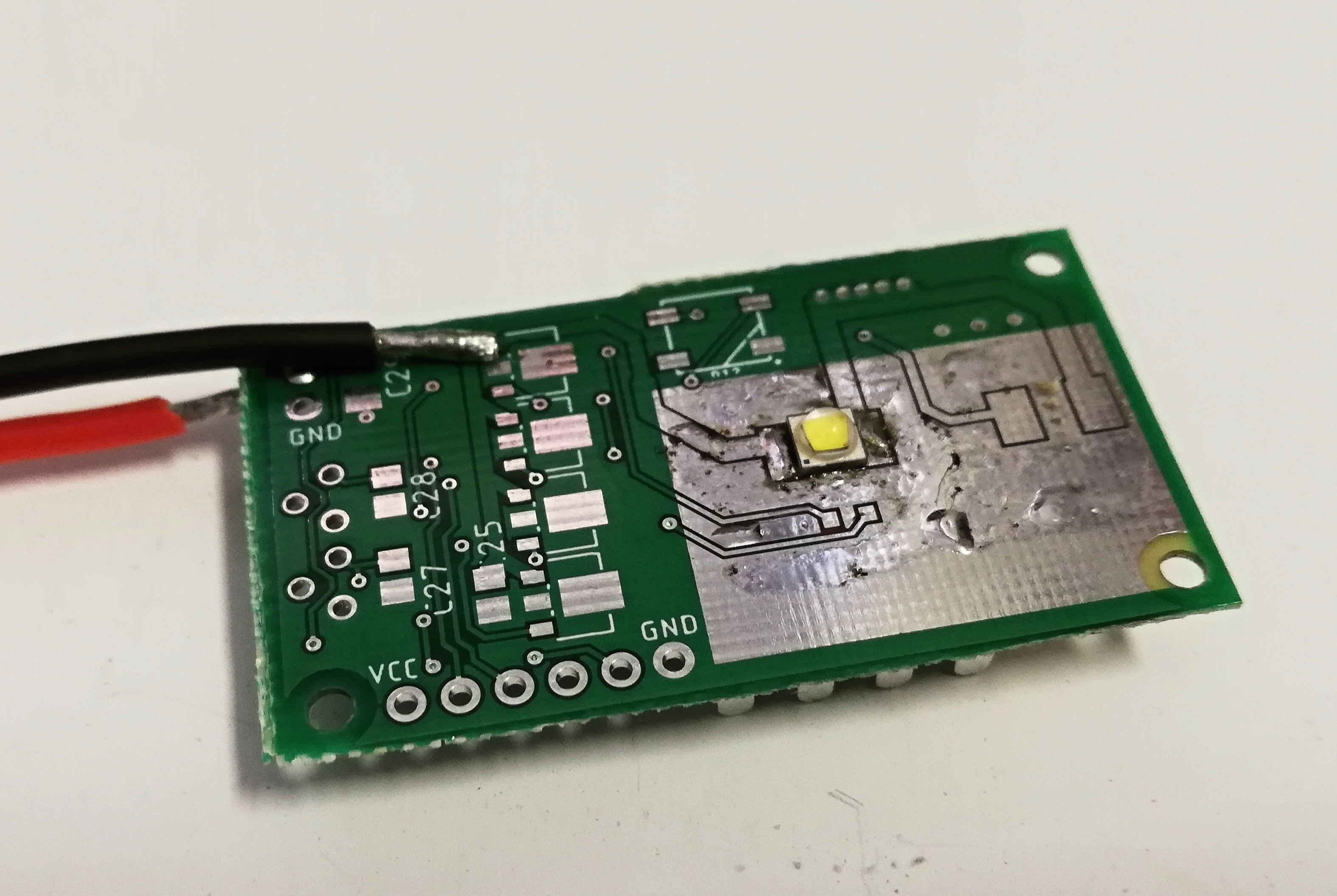 Modern LEDs have enormous efficiency – up to 40 % – but this still means that if you mount a 5 W LED on a PCB it will generate up to 3.5 W of heat. In one of my recent experiments, I tried making a headlamp using a Cree XPG-BWT LED. I made a small PCB for this purpose, with this LED and some driving circuitry (ATtiny24, CC sinks, and an RGB diode – because why not).

Normally, you would use aluminium-core board, which would spread and dissipate the heat well. But I wanted to see whenever it is possible to mount a 4.65 W LED on a normal FR4 board (the core of FR4 is glass-reinforced epoxy laminate, which is not particularly thermally conductive). For this reason, I ordered relatively thin board (0.8 mm) and made large areas of bare copper around the diode. On the front side (the side with the diode), there were 400 mm2 of bare copper and another 550 mm2 were on the bottom side. Both sides were interconnected with a lot of vias, with the intention that I will glue a small heatsink on the bottom side of the board with thermally conductive glue.

I reflowed the LED to the board and tinned all of the bare copper around the diode. I also filled all vias with solder to improve their thermal conductivity. Then I attached a thermocouple to the base of the diode and started driving the LED with constant current while carefully watching the temperature. However, without the heatsink I was not capable of driving the LED even with 700 mA. Here are the results:

So I used thermally conductive glue and attached a small 14 * 14 * 6 mm heatsink. This – not surprisingly – improved the cooling a little bit with the following results:

Note: the ambient temperature was 18 °C and there was no artificial airflow around the board.

Even a large area of bare copper (‘PCB heatsink’) cannot dissipate more than a few watts of heat. However, it can conduct the heat OK – at 1 amp, the LED was at 91 °C while the heatsink was at 78 °C. So the problem is more in the actual dissipation, not in conducting the heat away from the LED.

Note on driving the LEDs: the redneck way is to just put a resistor between the LED and the power source, but you probably know that a constant current is a much better idea. I recently discovered a very handy IC – the AMC7135, which is a 350-mA CC sink. It is widely available from many Chinese sites.