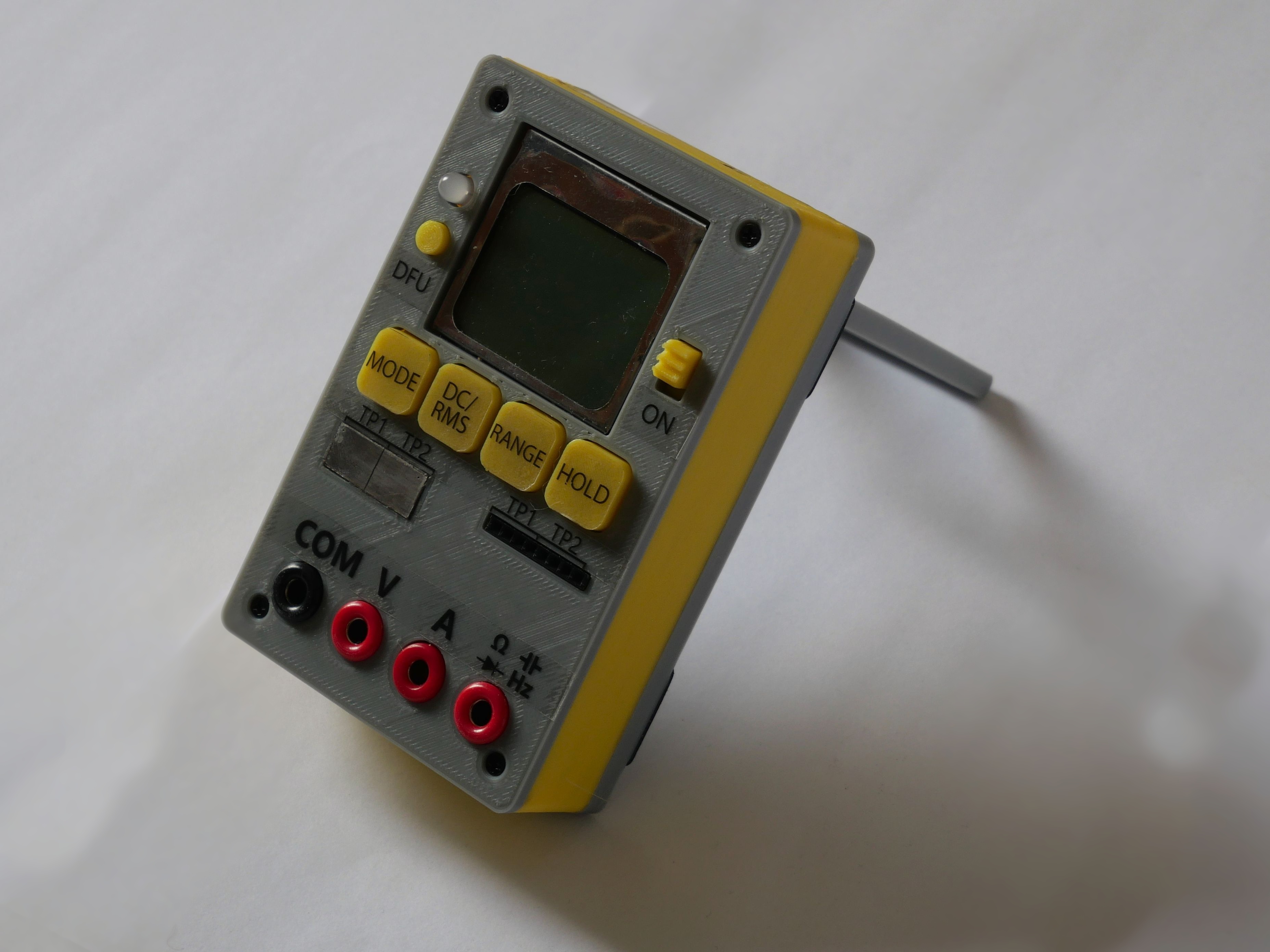 So I finally arrived at the point where I consider my Open Source Multimeter finished. It is not perfect, but it is more than good enough for my purposes and I also do not have time to develop it any further (at least for now). So in this article, I’ll descibe what I came up with from the ground up, since it might be hard for some people to keep track of all the changes (so this article might include parts from the previous blog posts). This time, I’ll be keeping this post updated, in case some small changes come up. So without further ado, here’s an updated video showing the DMM in action:

Long story short, I needed more multimeters. So I set myself a budget, made a list of requirements and started shopping.

After searching for a long time, I was disapointed, as I wasn’t capable of finding a single multimeter which would fullfill the above list. So I decided to try and design a simple multimeter for myself. It took a lot of time, but I am really glad that now I have a fully usable multimeter (and I am building three more for myself). Of course this cannot compare to a 200 dollar Fluke, but that’s not the point, really. But I’d say it is superior to a cheap Chinese multimeter from Ebay, and a datasheet below (which I will hopefully make in the next week) will show you it can even compare to a 50 Euro Brymen multimeter.

Just a disclaimer – you have probably noticed that there isn’t a range for AC mains voltages – and there are good reasons for that. Firstly, I just wouldn’t feel safe working with mains with something I made at home and secondly, all these CAT ratings would impose a lot of limitations on the multimeter. And lastly, I cannot even remeber the last time I measured mains, so I think I just don’t need such a range.

Since the start of this project there have been 6 “modes”: voltage, current, power, continuity, component test and frequency (this was actually added in the last revision). Simply said, it can measure:

I’ve also included a header which extends to the top side. It can either be used for programming/debugging or as a 4 bit IO (alternatively, two of the IO’s can also serve as I2C or UART). My idea is that you can plug in something like an expansion module, with for example thermocouple amplifier or SD card writer.

Of course a multimeter would be useless if it wasn’t showing accurate information. Initially, I was hoping to avoid calibration, but there are just too many variables. But after a really simple 5-minute calibration, these are the results you can achieve (all results are measured against my Brymen 867):

I am planning to do some more test (temperature stability etc.), but from the gallery above you can tell that with a more carefull calibration, you could probably get even better results.

The multimeter consists of two PCBs – one with the DMM itself and the other one contains the USB interface, battery charging and protection circuit. Both of them fit well into a 100 x 100 mm PCB order, which is something I really wanted, since that allows you to order the PCB really cheaply from China.

There is a lot of components on the main PCB, but most of them are passives. The footprints are 1206, even though I prefer to populate 1206 footprints with 0805 components. There are only two tricky ICs to solder – the main processor (STM32F373CCT6 in LQFP48) and the INA199 in SC-70-60 package. But otherwise it is pretty simple to assemble the board.

The whole case is 3D printed. It consists of a lot of parts, which are screwed together with various M2 screws. I also used brass insert nuts, but I am not sure if I won’t remove these in future cases I’ll print, since inserting them is a lot of fuzz and frankly, they are just not needed.

Another challenge I faced was how to put fine print onto the 3D printed part (button names, port names, etc.). In the initial release, I used normal paper, onto which I printed the labels and then superglued it to the case. The good thing about that was that it stuck well to the case, but it looked ugly. In this revision, I used self-adhesive transparent foil, which looks much better. The glue isn’t the strongest, but it hasn’t come off so far.

The hardware behind this prokect is really powerful. Unfortunately, I am more of a hardware guy and so there is a lot of features, which are supported in hardware but not yet implemented in software. Here’s a list of them from the top of my head (this is also something like a ToDo list):

Here’s a short list of pages where this project was featured, discussed or so on.

What I never realized before I started publishing my projects is how much extra work that is. One thing is to make the whole project/thing/board etc., but then it takes a whole lot of time to make it ‘publish-able’, to write documentation and so on. So I am always glad when it is time well spent and people read or discuss it.

I am really happy that I managed to get this into a fully usable state and it didn’t end up like a lot of other projects on the internet (that is, abandoned in the middle).

I have been using different revisions of this project daily and I haven’t had any major problems. Of course, there are still bugs in software and the ToDo list above is quite long.

All of the files are available on my GitHub under CC BY-NC-SA 4.0 license (Attribution-NonCommercial-ShareAlike 4.0 International). The 3D files for the case are also on Thingiverse.